It was not a new message but one that I was prompted by the Lord to speak on at our recently concluded Awakening Event, AWE2016.

After teaching about the fundamentals of Archippus Awakening and the importance of the aligning process, I spoke about the throwing on of mantles. Atop Mt Horeb, the mountain of the Lord, Elijah declared that he was the only one left. I can’t say that I have come up against 450 Baal prophets to the point of a showdown on Mt Carmel, and then pursued by a mad queen bent on taking my life. Nope, hopefully never. But that feeling of aloneness? Yes, I’ve felt that many times. Yet, in response to Elijah’s ‘complaint’, the Lord issued a new assignment: Go anoint Hazael, go anoint Jehu, go anoint Elisha. (1 Kings 19:15-16)

Interestingly, Elijah only fulfilled one-third of this assignment. And he didn’t even anoint Elisha, but merely appointed him – through the throwing on of the mantle. What the Lord showed me through this was that if I would be faithful to appoint and to raise up the next Archippus, this one (yes, just one) will enable the completion of assignments, even ones that are beyond my reach and time! This was what happened for Elijah, for it was Elisha who fulfilled the other two-thirds of what was given to Elijah. Make no mistake. Kingdom assignments at times are much larger than what we can see or imagine. 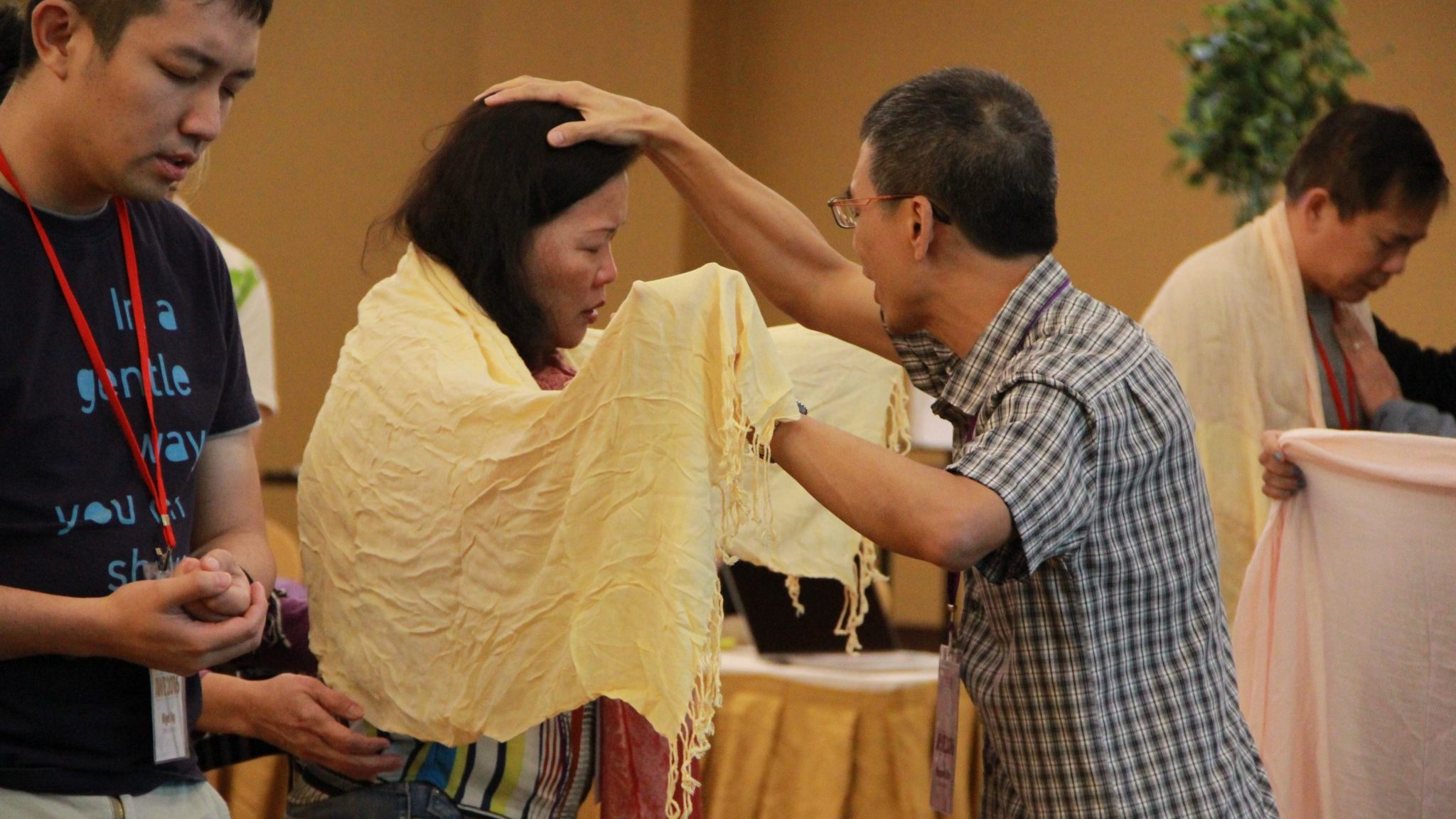 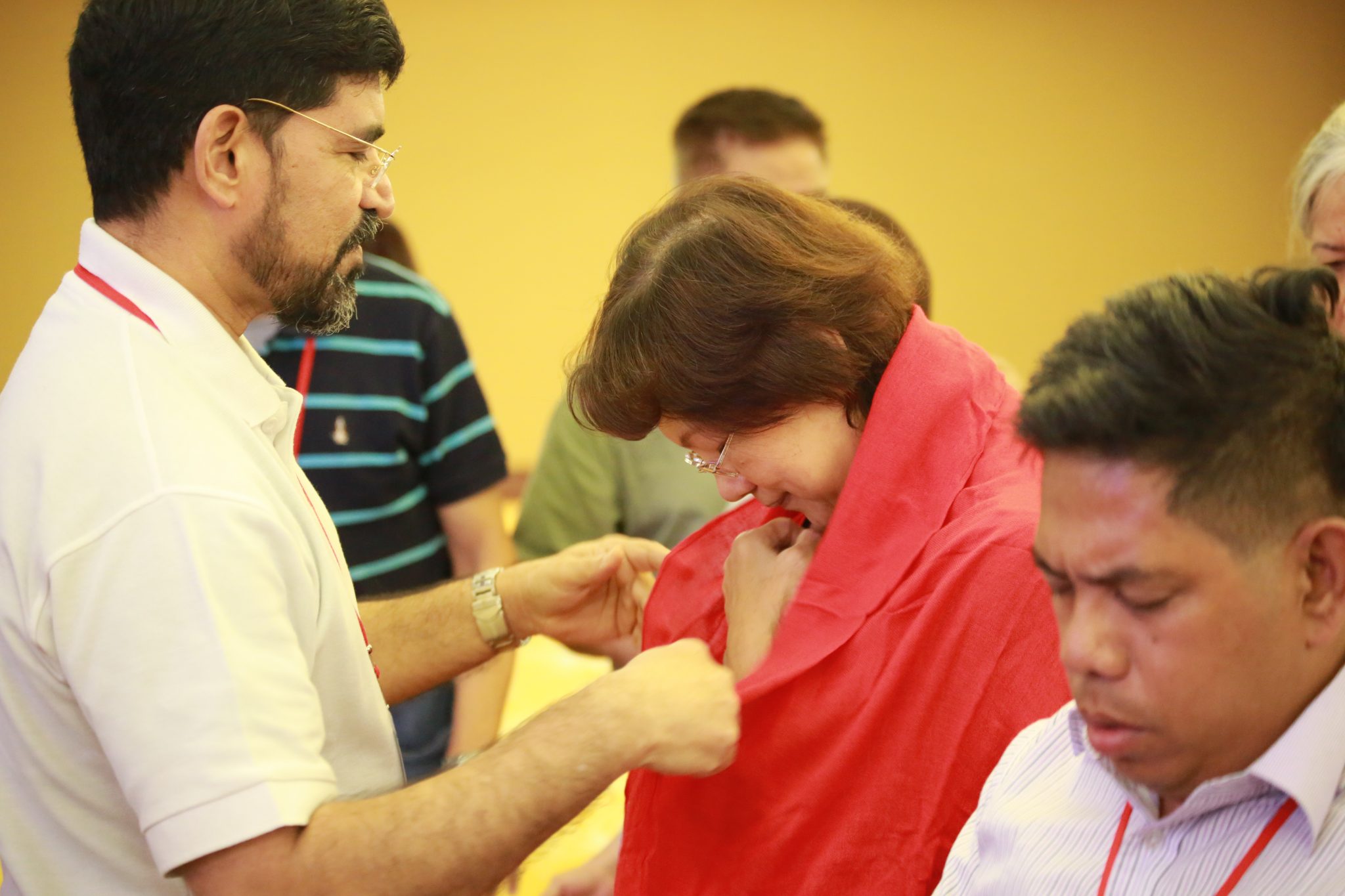 Symbolically and prophetically, mantles were thrown that night. No compulsion or coercion at all. To as many who wanted it thrown on them, they were free to respond to that invitation. Nice. But it doesn’t stop there.
The next morning, I presented Part II. It’s not enough merely to have mantles thrown on. There comes a time when the mantle must be taken up! And in between, be prepared for a season of training and discipleship.

After the mantle was thrown on Elisha, he is not mentioned again until just before the taking up of Elijah in a whirlwind (2 Kings 2:1-14). Elisha followed and learned from Elijah. Yet, everything hinged on him taking up the mantle. If he had left it on the ground, admiring it and then walking away, the story would have ended there. Thankfully, Elisha picked up the mantle and in doing so, picked up his own kingdom assignment. Yes, he received his kingdom assignment and was released to fulfil it! 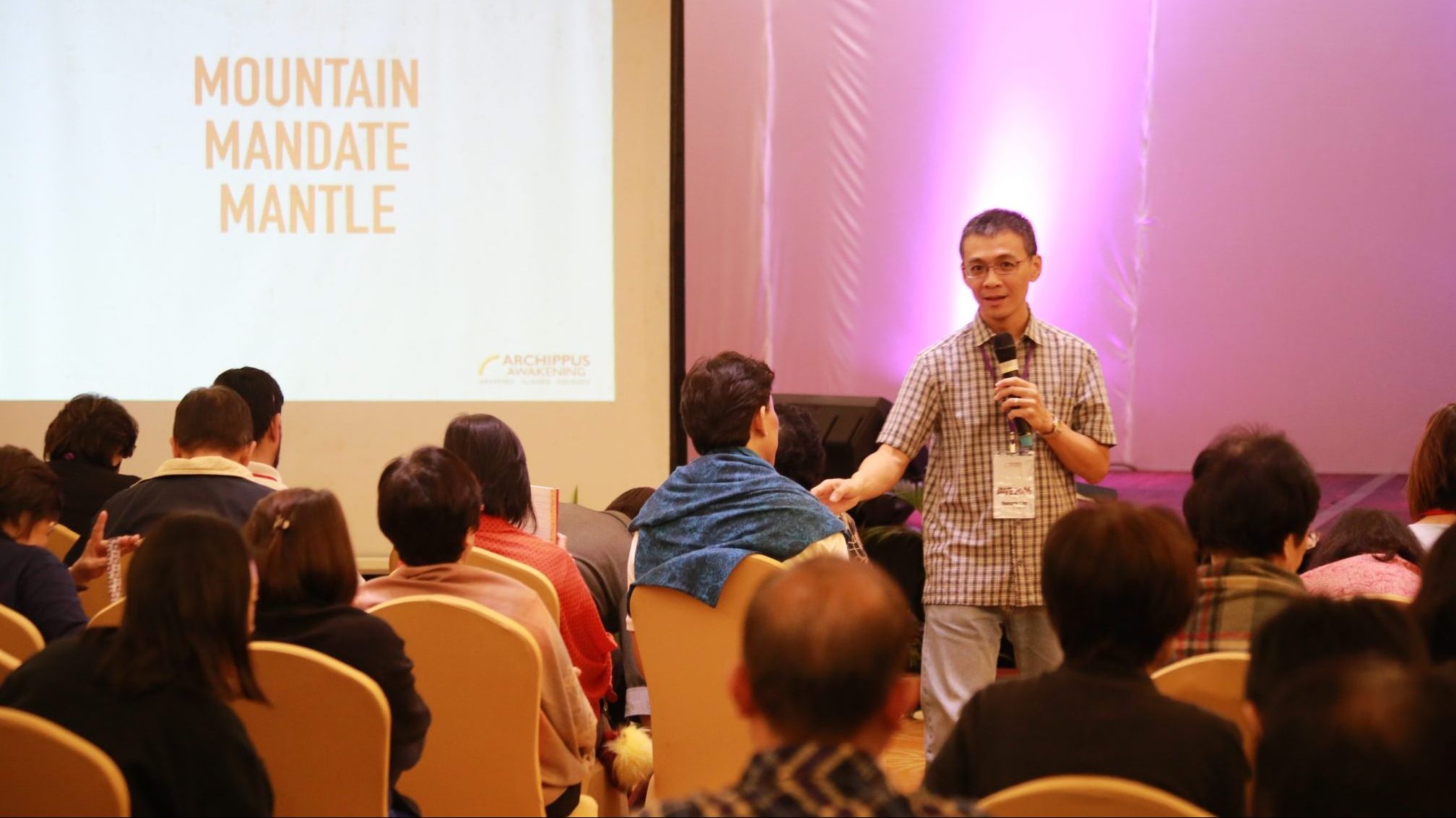 Here’s the challenge: Don’t be satisfied just to have mantles thrown on. Too many are happy to respond to an altar call, to be prayed over, hoping to receive more anointing. Once again, notice that Elijah didn’t even anoint Elisha but merely appointed him. Similarly, Elisha didn’t anoint Jehu or Hazael but also appointed them. Dear friends, be assured that the anointing will surely follow the appointing! There comes a point when mantles have to be taken up. Kingdom assignments must be received and owned. When you do that, you can be certain that the anointing will flow. To be sure, we don’t need more anointing. We just need to be about our kingdom assignments and the Lord promises to be with us, through the power of the Holy Spirit!

I am prompted to write this post because this morning, one of the AWE2016 participants tagged me in a similar posting by Hezekiah’s Wall. 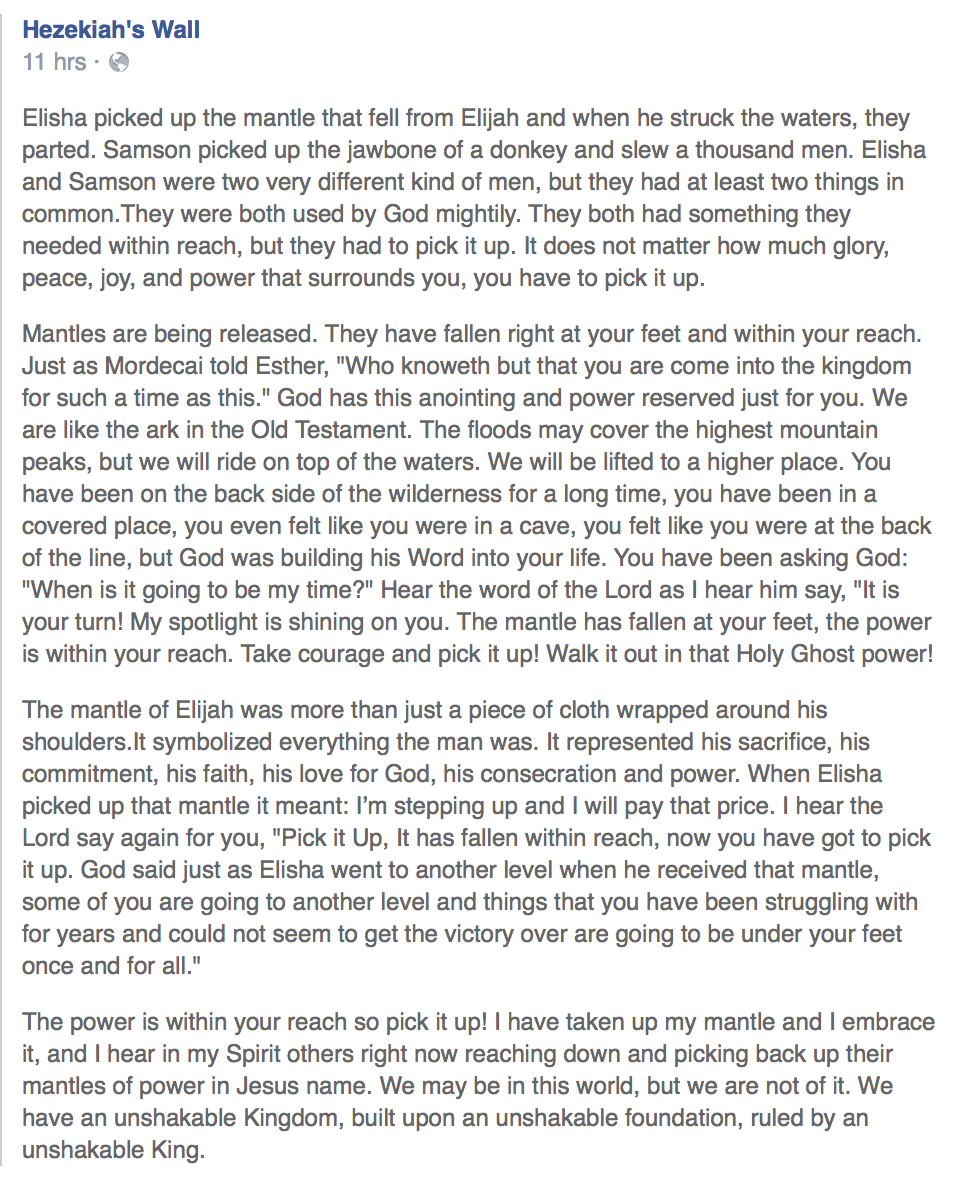 I believe this is the word of the season. Notice, also, the ’11 hrs’ under Hezekiah’s Wall. That was the time this article was shared with me, and I snapped a screenshot to capture this significant hour. Friends, it is the 11th hour and there is no time to waste. Mantles have already be thrown. The invitation has already been issued. The Lord is awakening the saints to know and fulfil their God-given kingdom assignments. Get equipped, get trained. Learn from someone who is on kingdom assignment.

And then, take up the mantle. Own it, for it is yours!

1 thought on “Take Up The Mantle”

𝐀𝐀𝐀 𝐖𝐞𝐛𝐢𝐧𝐚𝐫 𝐀n 𝐀rchippus 𝐀wakening (𝐀𝐀𝐀 ) is critical for all who desire to be awakened, aligned and assigned for Jesus and His kingdom. Many who desire it have been impacted by the message of Archippus Awakening. Watch this space. We will be featuring their testimonies, and kickstarting the series is one all the way from the Philippines. 𝐀𝐀𝐀 𝐖𝐞𝐛𝐢𝐧𝐚𝐫 is free and open to all. In Singapore. And the nations.All sessions conducted in English.𝐒𝐚𝐯𝐞 𝐲𝐨𝐮𝐫 𝐬𝐥𝐨𝐭 𝐧𝐨𝐰:tinyurl.com/aaawebinar2021𝐂𝐥𝐨𝐬𝐢𝐧𝐠 𝐃𝐚𝐭𝐞: 𝟐𝟖 𝐅𝐞𝐛𝐫𝐮𝐚𝐫𝐲 𝟐𝟎𝟐𝟏𝐅𝐢𝐧𝐝 𝐎𝐮𝐭 𝐌𝐨𝐫𝐞: fb.me/e/3SSH0hbDn ... See MoreSee Less

Archippus Awakening updated their info in the about section.

It is probably not uncommon for us to receive comforting and edifying prophecies. But what about those that sound harsh, and seemingly out of character of a God who is loving and good? What are we to make of such prophetic warnings? How are we to respond?𝐑𝐞𝐚𝐝 𝐇𝐞𝐧𝐬𝐨𝐧’𝐬 𝐛𝐥𝐨𝐠𝐩𝐨𝐬𝐭 𝐭𝐨 𝐟𝐢𝐧𝐝 𝐨𝐮𝐭:archippusawakening.org/blog/2018/12/11/heedingagoodgodsgraciouswarnings/ #iamarchippus #awakened #aligned #assigned #buildthearc ... See MoreSee Less

If you subscribe to Charisma magazine, you will receive tons (and I mean tons) of prophetic-type articles. It can be quite overwhelming and confusing as you consider the various prophetic utterances and promises. I have often wondered how believers are supposed to appropriate or respond to such decl...
View on Facebook
· Share